The Cook-Off……A Wonderful Lesson in Co-Operation…..

The long summer vacation is over and now all the children are back at school. During vacation time, families did all sorts of activities.

This blog is dedicated to six of our grandchildren who live in the Negev. They decided to do a very special activity and learned some important and valuable lessons along the way. A great big yashar koach to: Gilad, Nadav, Adi, Neta, Talia and Chen.


The children asked their mother if they could have a cooking contest. They wanted to prepare dinner. Devorah [their Mother] suggested that it would be better to do it for Shabbat because she would let them use better ingredients [chicken, beef, pareve whip cream…]
The junior cooking team would have to make the Shabbat night meal from the entree to the dessert. Their parents, Devorah and Hagai would be the judges and choose who prepared the best meal.
Devorah set some ground rules: they had to have approval of the menu they chose, they had to use ingredients that were in the house, only the older children could use the stove and they would have to clean up.
The children agreed to the rules and paired up into teams - one older and one younger to each team. They decided the contest would start the following Shabbat. The search was on for recipes. They looked online, in cookbooks and magazines.
The big question was...will Devorah’s kitchen survive? I’m pleased to report it did.

Gilad 14 1/2 and Nadav 6 1/2  were first team. They decided to make: baked tuna and veggies for the entree: The main course was chicken pirgiot, stir fried veggies and rice. And for dessert chocolate mousse.

Nadav peeled all of the the veggies and broke up the chocolate for the mousse. He also licked the bowl clean from the mousse when it was all done. Gilad made the tuna, the stir fried veggies, the rice, the pirgiot and the mousse.

Devorah only had dairy chocolate in the house and Gilad really wanted to make the mousse so went to the markolet [on the yishuv] and bought pareve chocolate with his own money.

The boys worked very hard together and when they were finished they left the kitchen "clean."  I can attest to the fact that the mousse was delicious. 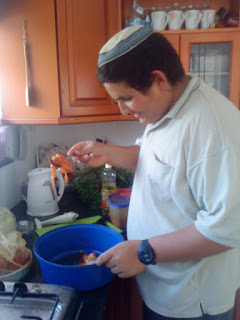 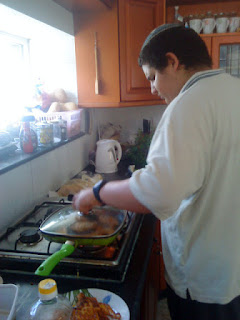 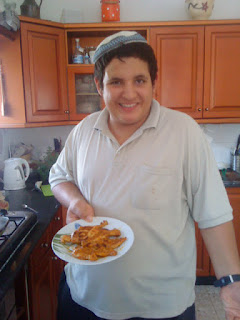 The following week was Adi 11 ½ and Neta 5.  The girls made bourakas and smoked eggplant with a techina sauce for the entree. The main course was stuffed chicken (with rice and veggies) and baby onions and potatoes placed all around the pan, stir fried veggies and some white rice (for Neta). Desert was a delicious cream roll with real cherry pie filling. Ima helped out a little.

Neta may be only 5 but she can peel veggies faster than any of the other kids. Adi was grossed out when she had to ‘massage’ the chicken with spices. She stuffed the chicken with rice and veggies and made the stir fried veggies. Their Ima helped burn the eggplant and peel it for the entrée. Neta helped make the cream roll and enjoyed licking the batter. Together with their Ima’s help they rolled the cream roll to let it cool. When cooled they opened it, and then filled it with cherry pie filling and whip cream. Then they rolled it up again and covered it with chocolate. The girls worked together and when they were finished they cleaned up. 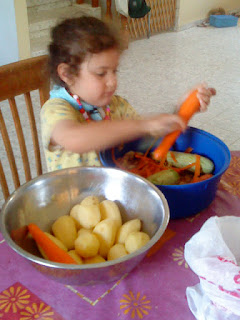 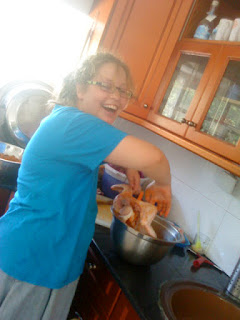 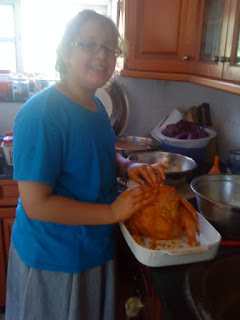 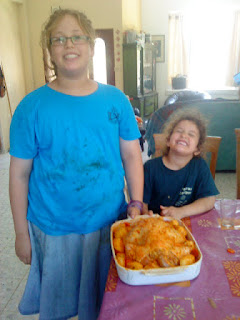 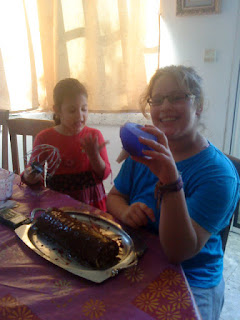 The last team was, Talia 10 an Chen 8. Being the last team the girls decided to go all out.

They chose a Tunisian veggie pattie called kfita for the entrée. Actually, the " kfita's" were ready in the freezer. Devorah and Hagai make a large batch once a month and freeze them. All the girls had to do was put them in a pan, make a red gravy and bake them. That was the easy part of the meal.

For the main meal they made "maklubah" (with beef, chicken and rice.) What’s maklubah you ask? Have a look at this link….. http://www.greenprophet.com/2011/10/recipe-maklubah-arabic-upside-down-chicken-rice/ Desert was lemon meringue pie, but not just any meringue pie but one that takes 2 hours to bake the shell.

The girls placed all the veggies on a pan, brushed them with oil and baked them instead of frying. Their Ima cooked the beef in a pressure cooker and together the girls slowly built their tower in a large pot.

Talia made the pie shell and lemon filling and Chen helped with the whip cream topping. 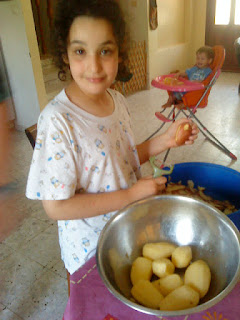 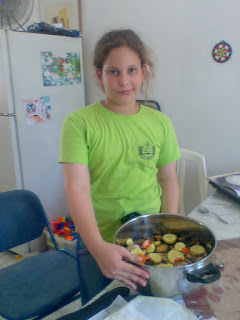 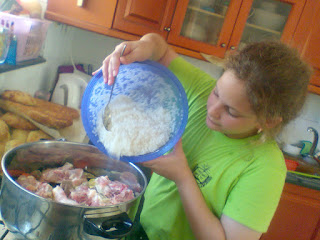 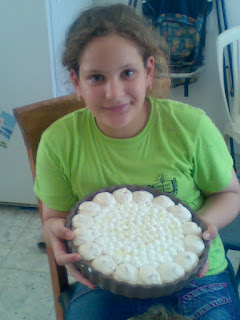 Erev Shabbat when their Ima went to flip the pot there was such suspense in the air. Will the "maklubah" stand like a mountain or come tumbling down? The kids were taking bets on #2.  It stood beautifully!!!

With the contest over…the siblings asked their parents who made the best meal. Devorah and Hagai had no trouble in deciding. There wasn’t anything to think about.

They were all WINNERS. Mazal-Tov to everyone… Saba and I are so proud of each of you.
A special thank-you to Devorah for taking pictures and filling in the blanks [things I didn’t know] for me.
Until next time…feel free to comment and share
Miriam
Posted by The Blogging Safta at 6:25 AM

Thank-you for reading my blog.