The Sitting Ducks of the South... 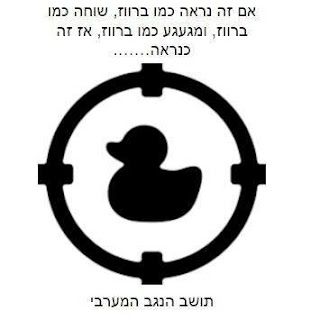 Simple and true words. We, the residents of the South, Israeli tax paying citizens, are sitting ducks waiting for the other shoe to fall.

We are subjected to the whims of Hamas, a terrorist organization that honours death, lives for death, and has no respect for any life.

Hamas is a fickle band of terrorists who at any given moment can fire one, two, three or 150 missiles at the South aiming for our destruction. They fly kites, balloons, condoms and drones with a molotov fire bomb attached wanting to burn our land and injure firefighters and soldiers.

To date they have burnt thousands of acres of Israeli farm land and forests. These flying firebombs have also landed and started fires on kibbutzim, moshavim, schoolyards, cities, just about anywhere and everywhere.

The government ordered the IDF to do a full assault and when Hamas cried ‘uncle’ and ran to Egypt to arrange a ceasefire, the IDF was ordered to stop. Instead of finishing the job, we said we will meet terror with actions and calm with calm. Who is our government trying so hard to please?

The first duty of an elected government is to protect its citizens. As citizens of the south, we feel we are second class citizens. Why isn’t the government protecting us?

I'm not a military expert, nor do I pretend to be, and it is not my place to tell the government how to answer, it is my place to say to this government "whether it is balloon launchers, terrorists firing missiles or trying to tear down the border fence, every offence must be answered strongly, not with words but with actions."

It is not normal for people to wait for the other shoe to fall.

That’s all for now

Miriam
* Many thanks to Adele Reamer for the use of her duck photo
Posted by The Blogging Safta at 9:10 AM No comments: