The theme of my blog Miriam’s Words is family. In this blog, I would like to tell a story about how a medical miracle brought happiness to our family.

The medical section of newspapers and magazines are full of articles pertaining to medical advances that have been discovered by this lab or that lab. We read about the drugs that have the potential to prevent cancer and alzheimers or the controversy concerning stem cell research.

Articles on how to prevent heart attacks, lower cholesterol and tips on good health are found in most magazines. The question is, would all of these wonderful medical discoveries have been discovered without The Hand of The One Above guiding the researcher and research? And the answer is a resounding no! Each medical advancement is a miracle that glorifies Hashem.

The medical miracle that I want to write about is In Vitro Fertilization also known as I.V. F. This medical miracle was discovered many years ago and has been improved over the years.

When the first talk about In Vitro Fertilization was taking place, I remember the controversy pro and con over this procedure. I.V.F. is a procedure in which the eggs from a woman’s ovary are removed and fertilized with sperm in a petri dish or test tube [hence test tube baby] and after several days the fertilized eggs are returned to the woman’s uterus.

Many people and I was included in this group, argued that man was taking nature into his own hand and playing G-D. Imagine a child being conceived in a small glass test tube. When the first little girl was born in 1978 and she was very healthy, it was something to behold. Little did I understand then, that it is Hashem that decides who, when and where a child is conceived.

Many write about the pain, personal suffering and disappointment, but hardly ever do you read the success stories, the stories that give hope to a childless couple going thru treatments. I decided to write about I.V.F. to tell a positive story.

You see, many years after IVF was discovered, my husband and I were blessed with a grandson, born from a frozen egg. My daughter jokes and calls him her 'Sanfrost' [an Israeli band of frozen vegetables] baby, because her egg was implanted after being defrosted.

After many years of marriage, my daughter and son-in-law made the decision to try I.V.F. in order to have a family. After some failed procedures, I won’t forget the day she called and said the pregnancy test was positive. She was laughing and crying for joy so hard it was difficult to understand what she was saying. On the 27th day of Tishri, 5758 [October 23rd 1997], our miracle grandson was born.

Today, our grandson Gilad is eleven years old. He is a gifted child, a Ben Torah, who would have never been born, if this medical technology had not been discovered. Our family would never have had the pleasure of shepping nachas listening to him discuss a parsha or his writing and delivering of a D'var Torah. Gilad, the oldest child in his family is the brother of five siblings, 4 sisters and one brother.

Gilad will be graduating from his elementary school in June and has been accepted to the southern branch of ”Yeshivat Yashlatz”, in Kfar Maimon, which is the high school of the prestigious “Yeshiva Mercaz Ha Rav”.

My understanding in this medical miracle has grown since our daughter first talked to us about their decision to try to have a family thru IVF. I have seen first hand the fears and disappointment, when a procedure doesn't work and I have seen the exhilarating happiness when the results of a procedure are positive.

Though this miracle, childless couples now have a chance to fulfill their dreams and know the joy of becoming parents. And we in the older generation are also blessed with a grandchild.

So next time we hear about a medical discovery, let's not be so quick to argue its downfall. We need to remember that each medical discovery is The Hand of The One Above at work. Your family's happiness may depend on it. 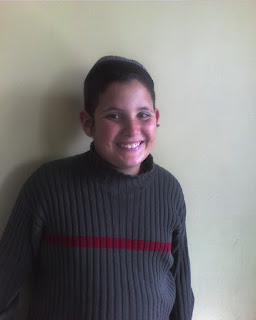 Thank-you Devorah for permission to tell your story.

Please feel free to comment and pass my blog around.

I have been asked by the AACI Southern Branch to post this notice.

We will be selling Purim cards in lieu of mishloach manot (shalach manos).
Our own talented artist, Ruth Gresser, http://ruthgresser-ruthart.com/home/ has kindly donated the card design. The cards, with envelopes, will sell for 10 for NIS 100 or 20 for NIS 180, plus postage, and we will provide a tax-deductible receipt. All proceeds will be earmarked for planned future programming and other activities to help facilitate the absorption of new olim to our region, as well as continued service to long-time Anglo residents of the South.

We ask you all to participate in this important project. You will have the satisfaction of helping to revitalize the Southern Branch of AACI, and to encourage new olim to make their home in the South.

For more information, to coordinate orders in your community, or for your personal needs, contact: