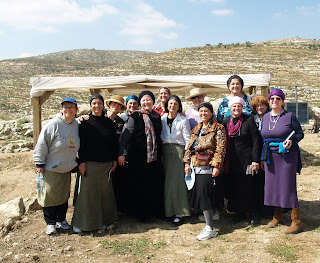 Once again, the Coffee Talk Ladies, a ‘secret’ Face Book group had another Face 2 Face get together, this time in Shiloh, an ancient Biblical city, located in the Ephraim hills, of southern Shomron and was the capital of Israel before the first Temple was built in Yerushalayim. Shiloh was the spiritual and administrative center of the Jewish people for 369 years.

Today, Shiloh is a beautiful yishuv housing 300 families, with gans, shuls, a pool, playgrounds, beautiful vegetation, a well stocked marcolet, and a small ‘everything you want’ variety store. Shiloh’s neighboring yishuvim are Eli and Maale Levona and surrounded by several arab villages.

A little background as to who are the Coffee Talk Ladies. Around a year and half ago, a few English speaking women who are early risers, would log on to Face Book, inviting their friends to join them for a virtual cup of coffee and a chat.

One of the women, Chaya O. took the morning chat one step further and created a Facebook secret women’s group called Coffee Talk and posted invitations to join.

And so new relationships and friendships were formed and our membership grew to thirty six English speaking women who, the majority are olim. Several members live in the States and some are planning to make Aliyah.  We discovered that our group has olim who are new...one and two years and veteran olim.... twenty, thirty, and more We run in age from the middle thirties and up to us seniors [but young at heart].

This is our third face to face. The first one was in the holy city of Yerushalayim, ladies then traveled to Netivot, to show solidarity with southern residents, who are under missile fire and this time Shiloh.

Since I have never been to Shiloh, I was very excited for this visit. My day started very early. I was meeting fellow Coffee Talk friend Esther on our 8:15 bus to Jerusalem. Meeting some of the other ladies at the Central bus station in Jerusalem, we boarded Egged #148 to Shiloh.  The scenery along the route was breathtaking...only Hashem, the Master Creator could have created such beauty. 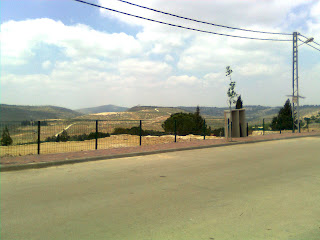 On the bus, we met a young chayalet [female soldier] who told us that she was from Texas and had come for one year to serve in the IDF. When asked if she was going back to the states when she was finished, her answer was “No, my mom and I made aliyah, and we are here to stay.” 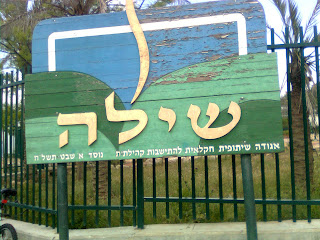 Arriving in Shiloh, we were met by Batya and Chava, 2 residents of Shiloh. The ladies took us on a little tour of the yishuv while we waited for the rest to arrive. 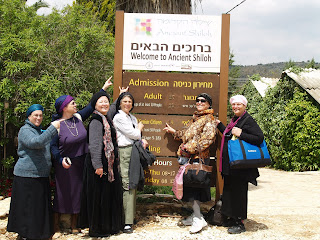 Our tour of biblical Shiloh started at Tel Shiloh. Our tour guide Franny, was magnificent. When she spoke, one could see how much she loves the land. Her knowledge of the Tanach was superb. As we viewed the ruins and ancient buildings, she told us its history, and read to us from the Tanach. Many thanks to Coffee Talk friend Miryam Blum for her insights.
Our last stop on the tour was the site of the Mishkan where Chana, the wife of Elkanah, davened and pleaded with Hashem to grant her a child. (Samuel 1:10) Her tefillah was answered and Chana gave birth to a son, whom she named Samuel and later became the first king of Israel.

Franny told us that many women who have had problems conceiving, come to this very special piece of land to daven and plead for a child. She told us a very moving story.

There was a couple from Panama who had been married for many years and were childless. The doctors could not give them any reason why they hadn’t conceived. They went to see their Rav and asked him to recommend another doctor. The Rav told them to go to Shiloh and plead with Hashem on the same land that Chana pleaded. And so they went to Shiloh, davened with all their might and their prayers were answered. They were granted a son.  Thirteen years later, this boy celebrated his bar-mitzvah in Shiloh and today this boy [now a young man] is serving in the IDF. What a beautiful inspiring story.

We ended our tour with a visit to the gift shop and then enjoyed ‘lupper’ at a pizza restaurant located on the yishuv. Thank-you Bracha for explaining and reciting this beautiful Bracha for us.

Baruch Ata Hashem Elokeinu melech Ha'Olam Meitziv G'vul Almana. In the Artscroll siddur it appears under "Blessings over phenomena and events", and says, "upon seeing a destroyed synagogue that has been restored to its previous grandeur", and literally translates "Who sets a limit for a widow". It is based on the gemarra Brachot 58/2, which uses as its source a verse in Mishlei 15:25.

During the meal, a call via Skype came in from a group friend who lives in Colorado. We each had an opportunity to say hello.

I would like to thank Batya Meded for her hard work in organizing ths beautiful day. It was truly a day I won't forget. I invite you to read Batya's excellent blog. http://shilohmusings.blogspot.co.il/2013/04/pilgrimage-to-shiloh-like-in-ancient.html

To visit and for more information about Shiloh HaKeduma, Tel Shiloh, contact visit@telshilo.org.il or call 02-994-4019 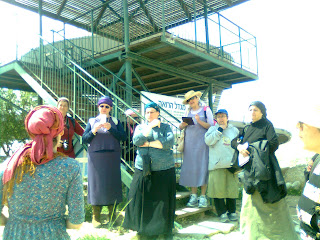 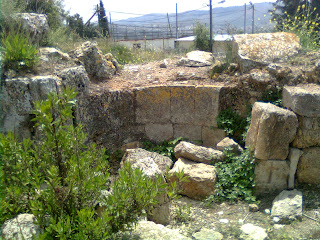 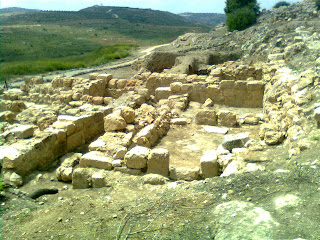 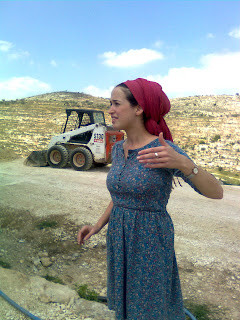 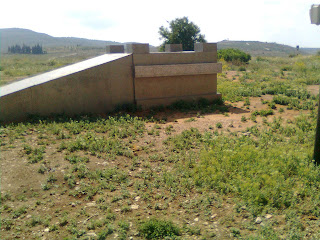 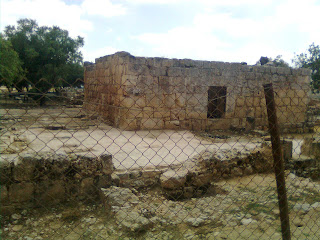 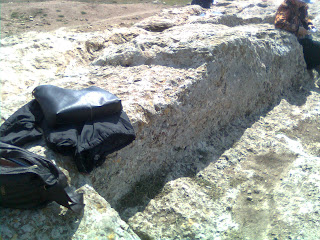 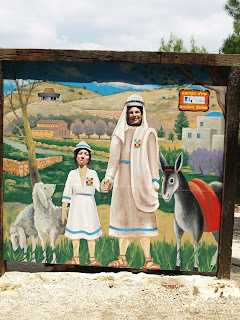