בס''ד
A Time of Sorrow 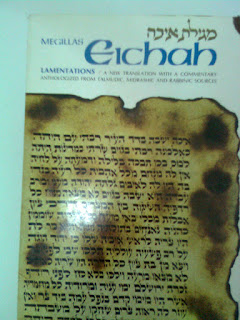 During the long hot days of summer, six weeks after Shavout, are The Three Weeks. A time of sorrow for the Jewish people. We are now in the second week of The Three Weeks.

The first day, the 17 Tammuz [July 19th] was a day fast. The last day, the 9th of Av, [August 9th] is Tish B’Av. Starting from the previous evening, until the evening of the 9th is a 25 hour fast. Seven weeks later, is the start of the Yamim Noraim [Days of Awe] beginning with Rosh Hashana and ending with Yom Kippur.
There are many laws pertaining to the three weeks.  To learn more about time, I would like to recommend The Three Weeks Aish
A couple of years ago, I wrote a poem called Tish B"Av, A Day of Sorrow.
A day of sorrow,
the 9th of Av.
corresponding this year to
August 9th
The blackest day,
we Jews know.
Hashem commanded us to fast
and to give up our comforts.
We read Megillah Eichah
Lamentations
And say kinot.
Why do we have this terrible day?
Is it because we cried for nothing so long ago?
Hashem said “you want to cry,
I’ll give you something to cry about.”
So many tragedies
have struck
the Jewish people
on the 9th of Av.
Many were murdered on the 9th of Av
in pogroms and the Holocaust
for no other reason than
they were Jews.
We have suffered all through our history
Moshiach, Moshiach, where are you?
“We need you now”, our people beg
To restore our nation to its glory.
Today we have our homeland
Eretz Yisrael.
The land Hashem promised to
Avraham Avinu.
Please, no more fighting
Jew against Jew
or speaking lashon hara.
An united front
is what is needed
to prove
that we are worthy
of His gift.
And Tish B’Av
will be no more…..
Have an easy fast.
Until next time
Miriam