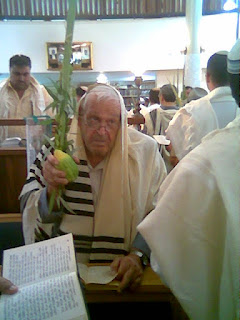 The central theme of my blog Miriam’s Words is family. When my daughter Devorah and Hagai were married, Devorah was very fortunate to join a wonderful family, The Horevs.

This week is eleven months since Hagai’s father and Devorah’s father-in-law, Yitzchak Horev a”h passed away. On 5th of Kislev, the Horev family lost the patriarch of their family. And what a loss it has been!

This blog is dedicated to his memory.

I would like to give you some background about this man. First and foremost he was a tzadik. Reb Yitzchak suffered personally so that he could live in Israel. In his later years he would sit in the Beit Knesset and learn day and night. He started a Tehillim group [psalms] on the Moshav called Tehillim Melech David and through his inspiration, the men would learn Tehillim all day long. Because he was so skilled in reading, comprehension and writing in Hebrew, everyone on the Moshav that needed a letter read or written, would come to him.

Reb Yitzchak had a special relationship with his grandchildren. He would play with them and learn Torah with them. He had a walker with a seat and he would give the little children rides on his walker. The older grandchildren knew he was someone to turn to whenever they needed to talk and ask questions.

His funeral was no ordinary funeral. According to the Minhag of Jerba, when a learned man who is married and has children reaches the age of 75 he is called a Tzadik and is buried with the outmost of respect according to the customs of a Tzadik.

Rabbanim came from everywhere and all who gave eulogies spoke about this special man in glorifing words. His youngest daughter spoke from her heart and moved everyone.

Before the burial there were seven Hakafot [circles] around his Talit covered body. [In Israel we don’t usually use coffins]. All the men participated in the honour of taking part in the funeral of a tzadik. The shofar was being blown through out the Hakafot. After the hakafot and on the way to the burial they chanted the song Bar Yochai.

When his body was being lowered into the ground for burial, several of his young grandsons went to watch. When Devorah asked her son Gilad why he went when he was told not too, he answered her “I just wanted to see Saba for one last time.” His Saba was his hero.

During shiva, Rabbanim and ordinary people came to menachem [to mourn and show respect] the 16 family members sitting shiva.

Rabbanim would give shuirim all day long. There were 2 large tents set up in front of his home and the amount of bus loads of people who came each day and evening was mind boggling. From the first morning davening [prayers] at 6:00 a.m. until midnight everyday, people came to pay their respects.

I must tell you this very interesting anecdote: When Gilad was born he developed a very bad case of jaundice. At 3 weeks old, he still hadn’t had a brit.

In the meanwhile Devorah and Hagai had decided that they would name their baby son Gilad Eliyahu Raphael. Hagai’s father called him and said that that he had to speak to him. Hagai went immediately to his father.

Reb Yitzchak told him that he had a dream about a very prominent Rav from Jerba, Tunis, Rav Raphael Chadir Tzaban a”h. Rav Tzaban had passed away not long ago and he dreamt that Rav Tzaban came to him in a dream and said it is time for the baby to have a Brit. He asked Hagai if he could possibly give Raphael as one of the names. Hagai agreed immediately. His father said, “don’t you have to discuss this with Devorah.” Hagai, not wanting to tell him that they had already decided on this name just said that Devorah will like the name and will agree.

As far as Reb Yitzchak ever knew, Gilad’s name Raphael came from him.

Last night [Wednesday] was Reb Yitzchak’s Haskara [the Sephardim custom for a yartzheit]. More than 150 people came to remember Reb Yitzchak. Rabbanim spoke about how much he was missed and the good things that he did in his lifetime. Over the past 11 months, his sons have been learning mishnah once a week in their father’s memory. Last night the mishnah was finished and they made a Seum Masechet. [conclusion of a Mishnah.]

This past May, as a school project, Gilad had to write about his roots, to learn who he was and where did he come from. He wrote so lovingly and in great detail about his Saba Yitzchak that I decided to use his words.

This is Gilad’s project.

Name: Yitzchak Churi. [ Reb Yitzchak was an ardent Zionist and wanted to have a Hebrew name. He chose Horev because it means Har Sinai.]

My Saba's a”h was born in Tunisia and his family lived on the Island of Jerba.

When my Saba was 20 years old, he decided to emmigrate to Israel. For an entire year, he participated in the course given by the Jewish Agency to prepare for living in Israel.

In 1946, Saba Yitzchak went alone from Jerba to Tunis,[ the capital of Tunisa] where he received a passport. His family came several years later.

He went to Algiers and was there for three months. After the three months my saba (and other immigrants) were put on a Greek ship and it set sail for Israel. On the ship there was severe famine and illness.[My Saba always said that the ship was so old it reminded him of a shell from a walnut.] When they approached the waters of Israel in Haifa, the British seized the ship and forced my Saba (and the other immigrants) to board the British ship.

They were taken Cyprus to a hard working prison camp. In the camp the food was not kosher. They didn’t have any beds, and the guards were forever humiliating the Jews. Saba tried to escape twice from the prison camp. On his first attempt my Saba and two friends managed to dig a tunnel underneath the camp. When the guard saw one of his friends who was the first to head out of the tunnel, he shot him to death. Saba and his friend quickly returned back and their lives were saved by a miracle. Saba decided to attempt the second escape as a woman to cross the checkpoints and tried to exit the prison as a visitor.

Saba got a woman's wig and a dress and shoes and managed to go through all the checkpoints of the prison except the last checkpoint. There was a women guard who was suspicious of the strange woman walking in high heels. She stopped him, stripped him and found he was a prisoner tryng to escape. He was put into solitary confinement until he was released.

In 1948 when the State of Israel was established, my Saba and the rest of the camp’s political inmates were released and sent to Israel.

In December 1948, Saba Yitzchak was sent to live Kibbutz Tirat Zvi in the Beit She'an Valley.

He later met and married my Safta Miriam ad120. They moved to the Negev and were co-founders of Moshav Sumara. In 1951 the Moshav moved to a permanent location and was renamed Moshav Sharsharet.

Life was very hard. They were living very close to the Arabs and they suffered persecution and killings of their fellow Moshav members. They had no running water, or electricity or permanent structures. In every respect they lived in substandard conditions. Saba was appointed from the Jewish Agency to be the person in charge of the Moshav. Saba was responsible for the distribution of food that they receive from the Jewish Agency.

He would go to work in Tel Aviv every Sunday, leaving his wife and children. Only on Friday he would return back home to the family. He later worked for the Moetza Sdot Negev [regional council] in charge the water control.

My Saba and Safta raised B”H 13 children. Today there are more than 75 grandchildren and 6 great-grandchildren.

Saba Yitzchak taught his children and grandchildren to grow up in the way of the Torah and not to give up their principles.

Thank-you to Devorah for helping with the translation and in filling in the missing pieces.

It was my husband Avraham and my honor to have known Reb Yitzchak Horev. May his wife Miriam and their children, grandchildren and great-grandchildren be blessed with good health and many years of happiness.

Feel free to comment and pass this blog around.