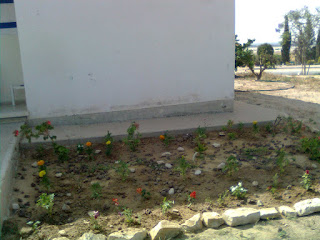 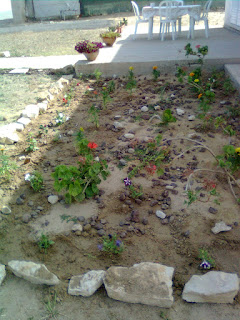 This coming Sivan /June, my husband and I will G-D willing celebrate our 44th wedding anniversary. Since the beginning of our marriage, except when we made Aliyah and rented a house on my children’s kibbutz, we lived in a duplex or apartment building.Never, did we have to look after the grounds and do any gardening.

I grew up in a house and when my husband and I were dating, several times Avraham would help my father a”h garden. Whether it was weeding or planting shrubs in the rain, it was always an enjoyable experience.

This past September, we rented a house on my daughter Devorah's yishuv in the Negev.

We have land all around our house with fruit trees growing on the side and in the backyard.

The grounds had really been neglected for many years. We told the owner that we would look after the fruit trees. He in turn told us to help ourselves to the fruit.

The front of the house was the real problem. I wanted to make a flower garden, but before I could start, I had to weed and clean up all the garbage that was over flowing and had accumulated over the years.

Cleaning up was no easy job. Using a hoe, and all the bending and picking up, was certainly giving us our daily exercise. The ground was so hard, even with wearing work gloves, I had blisters on my fingers..

After several hours of work, we were starting to see some results. We were so tired but it was a good tired, working this piece of Holy land.

I have a good imagination, and I could picture what I wanted our garden to look like. I would make the perimeter of the garden with large rocks and use brown lava rocks in between the plants. The rocks were easy to find, but boy
were they heavy. We had a good supply of the lava rocks which we found all over the property.

Next came the planting. A neighbour gave us some tall cactus to get our garden started. In the center of the garden we planted a branch from a water cactus that had broken off from my daughter’s plant. Around each plant, I encircled them with small white rocks. My little garden was taking shape and looking good.

All we were missing were flowers. We are renting our house, and the owner of the house is a farmer who grows flowers. I asked him for some flowers. He said sure! I thought he would bring us a few flowers, but instead, to our shock, he brought a bag of more than sixty different types and colours of flowers.

We had our work cut out. Moetzi Shabbat, the night of Lag B’Omer, Avraham, Eli-Chaim and myself started planting. Avraham and Eli-Chaim dug the holes and I planted. We worked like team work. I told them where to dig, they dug, I planted. One after another.

The air was all ready getting smoky and smelly from the bonfires around us, but I really wanted to finish at night. During the day, the sun is too strong and hot too work.

We planted forty beautiful flowers. I scattered the brown lava rocks everywhere, Avraham watered our flowers and we all enjoyed looking at the garden we had made.

I had a feeling of real satisfaction. I felt so privileged to live in Eretz Yisrael and have an opportunity to work and enjoy our Holy land.

But, my happiness changed to sadness a couple days later when we discovered one morning that a neighbour’s rabbits had gotten into our garden during the night and ate or destroyed most of the flowers. I wanted to cry.

When Avraham spoke to the neighbour, he acknowledged that his rabbits cause problems, but said he didn't know what to do with them. He tried to cage them, but they are fast and smart and know out to get out.

Basically, he said politely, live with it!

And so dear readers, if you know a way to keep rabbits out of the garden, please write a comment at the bottom of the blog and let me know how!

I now know how Farmer McGregor felt, in the story The Tale of Peter Rabbit by Beatrix Potter, when Peter kept eating his veggies in his garden.

Until next time!
Miriam
Posted by The Blogging Safta at 8:59 AM 5 comments: