Today, the 17th of Sivan, Avraham and I are celebrating our 48th wedding anniversary. The secular date is June 25, three weeks after the six day war in Eretz Yisrael. Our Rabbi told my parents that if Israel was still at war on our wedding day, he wouldn’t allow any music.  We could only have the chuppah and the dinner.

We were the first chatan and Kallah to be married in the new sanctuary at the Young Israel of Chomedey,an orthodox shul in Chomedey, a suburb of Montreal. 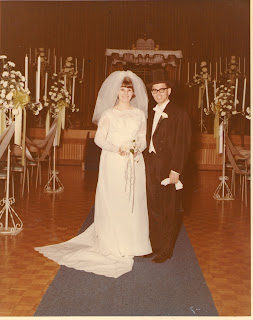 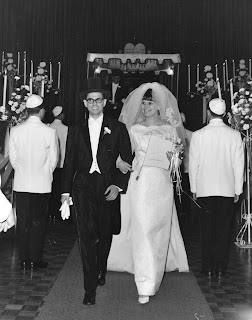 Our wedding was a real ‘fairytale’ wedding. The shul was decorated with gorgeous flowers and candles lining the aisles.

Avraham, my father a”H, my father-in-law a”H, the best man and the little ring bearer wore tails and top hats and white gloves. [Avraham couldn’t wait to toss the hat and gloves]

We had 10 ushers who wore white dinner jackets and kipot. My dear friend Selma was my maid of honour. Wearing a green gown and long while gloves she was beautiful. 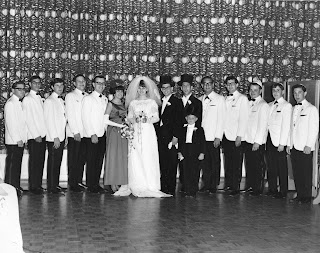 Being the only daughter, I was the princess of the family and my parents spared no expense for my special day. Everything had to be perfect. My mother a”H made sure the food, the table settings, the music, the pictures, just everything was the way she ordered it.

It was an evening never to be forgotten.

Only many years later did I realize that one of the reasons for my ‘fairytale’ wedding was because my mother never got over the fact that her special day was not like the way she dreamt it would be because of another war.

My father was a front line soldier in the Canadian army and received a surprise order that he was being deployed to Europe in 72 hours. This was 7 days before their wedding date, a week after Tish B’Av.   My father tried to convince his commander to allow him to remain in Canada until after the wedding, but the army said no. They told him to get married before he was deployed.

The family was frantic because it was the 9 days when you can’t have weddings.  My Zeidi called the family Rav who sent the chatan and Kallah and their parents to see the Chief Rav of Montreal for a ruling.

The Rav said that since there was a wedding date set and my father was being sent to war before this date, they should be married the next day before sunset [which was was Friday] and he would do the ceremony.

The Rav said they could only have their parents and a minyan present. He told my mother that she could not wear a wedding gown or take any pictures. The Shabbat meal would be the sheva bracha.

And so my parents were married Friday afternoon 2 days before Tish B’Av. My father was deployed the next day for two and half years.

A couple of days before her original wedding date, the store where she bought her wedding gown called to ask why she hadn’t come to pick up her dress.  She told them to give it to a needy bride. She never wanted to see the dress again.

Our 48 years have been filled with wonderful and not so wonderful memories.  We have been blessed with three great children, 2 super sons-in-law and thirteen precious grandchildren.

We now have a married granddaughter and grandsons who served and are serving in the IDF. We are living our dream in Eretz Yisrael and thankful to be growing older together surrounded by our loving family.

That’s all for now. Feel free to comment.
Miriam
Posted by The Blogging Safta at 7:50 AM 10 comments: