בס''ד
Time Brings Amazing Milestones ......
On Rosh Chodesh Tevet 5751, [December 17th 1990], on a cold Canadian, winter evening, our son-in-law Eliezer called and shouted, “Mazal-Tov, Mazal-Tov, it’s a boy. Naomi will call you later. I want to go and see my son.” And with that phone call my husband Avraham and I became Saba and Safta [grandparents] for the first time.

Our daughter Naomi had just given birth to our first grandchild at Haddassah Ein Kerem Hospital in Jerusalem. Eight days later Naomi and Eliezer named our precious grandson Yonatan David. Yonatan because it was the 7th night of Chanukah and David, my father’s second name. 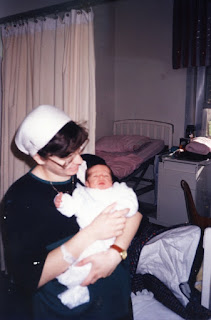 
Three weeks later I had the pleasure of meeting my sweet grandson. 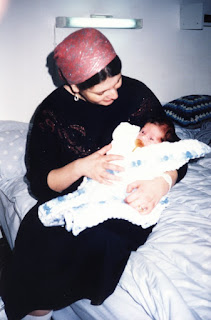 
Yoni had to wait four months and travel to before he met his Avraham. 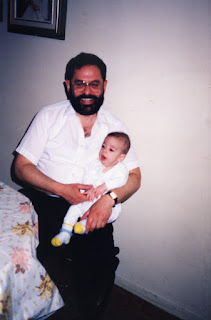 
It is so hard for us to believe that our little Yoni is 20 years old and all grown up. Yoni is learning in a Hesdar Yeshiva in Holon and in March he will go into the army. The time has passed so quickly.

Mazal-tov Yoni and happy birthday ad 120 . May you always celebrate your birthday in good health and happiness. Saba and I pray that Hashem will watch over you and guide you all the days of your life. We are so proud of you. 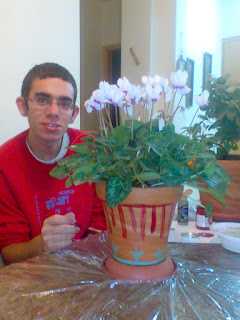 The title of this blog is Time Brings Amazing Milestones. But what is time? One definition that I found was: Time is always changing. Time never stands still. Time is continuous, and not stationary. Time changes our perceptions, and our perceptions of time change continuously. Time is infinite; change is essential to time.
Another definition is: an indefinite period [usually marked by specific attributes or activities].
Time is something that we take for granted. How many times have you said, “I’ll do it tomorrow” ..but somehow tomorrow never seems to come, until we get to a point where the task must be done.

When a couple gets married they start off as two. G-D willing over the years children are born and with more time the children marry and sons-in-law and daughters-in-law join the family.

More time passes, we, the older couple, celebrate the birth of grandchildren and if we are fortunate enough, great-grandchildren. Avraham and I have been blessed with a beautiful family and twelve precious grandchildren.

Time also plays a part in Aliyah. Even though Avraham and I spoke about making Aliyah for years, when we finally decided that it was time for us to come home [2 daughters and 3 grandchildren waiting for us in Israel] our process didn’t take long. From our first appointment with the shaliach in Toronto in December 1993, we landed at Ben Gurion and came home, May 1994, 5 months later. The first thing our daughters said to us when they came to pick us up at the airport was “ show us your Tuedat Olay.” [certificate of Aliyah]

They couldn’t believe we actually made Aliyah.

Today we have been in Israel 16 ½ years. Our only regret was that we didn’t come home sooner.

Since I believe that everything is predetermined, I guess the time wasn’t right for us……..

Time plays a part in who we are and how we develop our characters. When you are five years old, someone 10 is considered old. A couple of years ago, I asked my young granddaughter’s how old is old, one said 25 and another said 40. The third granddaughter said very matter of fact, “Safta, you are old.” As time passes our thoughts and actions mature.

Baruch Hashem, today, Avraham and I are seniors according to the age that the government sets. Not that we feel, look or act like seniors…..but it is nice to get that pension cheque.

So the next time you have something to do, do it right away because time does not stand still for anyone.

Chanukah Sameach to you and yours

Miriam
Posted by The Blogging Safta at 1:21 PM 4 comments: