Finally, a Reply From the Prime Minister's Office.....


As many people know, in June, I posted a blog called Still Waiting for an Answer to Prime Minister Netanyahu, telling him that I live in the South with my family and that we the residents of the Negev and South are being held hostage by Hamas, never knowing when the next Grad missile will be fired at us.
I asked him what he is going to do to stop this insane situation.
http://miriamswords.blogspot.co.il/2012_06_24_archive.html
In my original blog posting, I said that if I received a reply I would post the letter.
Yesterday, I received a reply from a Mira Cohen of the Public Affairs Department of the Prime Minister’s office.
The gist of the letter was that she was writing to me on behalf of the Prime Minister. That the P.M. knows that the lives of people of the Negev and South are difficult and that he is determined to improve our lives and the security situation.
She thanked me for writing……just another standard political letter…..
I will post the letter at the end of this blog.
Truth be told, this reply was all I was expecting. When I wrote the original letter, Hamas was firing Grad missiles and Kassams into the South, one after another.
Children were terrified, the elderly were petrified, the security situation was totally out of control. I wanted to sound off and let the P.M. know that his inactions and the attitude and actions of Defense Minister Ehud Barak were making our lives unbearable.
Seven of my grandchildren live in the Negev, have never lived a day without the fear of terror striking. My youngest grandson was born at Soroka Hospital in Beer Sheva eleven months ago.  During my daughter’s delivery, the in-coming missile warning siren was ringing and Hamas was firing Grad missiles at Beer Sheva. This was Yair’s introduction to the world.  Some welcome!
The government was treating over a million residents like second class citizens.  We just didn’t count.
Presently, it is relatively quiet. Two weeks ago, Hamas fired five grad missiles at the same time at Netivot. Two were downed by the iron dome and two were found in a field. The fifth rocket which did not explode, was found by children five days later. Baruch Hashem they were not hurt.
Army sappers safely detonated the rocket.
My family and I love living in the Negev. This area is a wonderful part of our country to live in and raise a family. Residents are warm and inviting. The scenery is breathtaking. Beer Sheva, known as the capital of the Negev is a bustling city with great places to visit and shop.
Netivot, five minutes from where I live is growing so quickly. Apartments are going up everywhere, malls are opening and the streets are busy with shoppers and business people. There isn’t anything you can’t find or buy in Netivot. The quality of life is wonderful.
The land in my area, Netivot, Ma’agalim and the moshavim was called Gerar Gen. 20:1, in the time of the bible. Our forefather, Avraham Avinu spent much time walking this land. We today have the privilege to walk and live on the same land.
The Negev has so much history. What a pity it has been hijacked by terrorists who want nothing more than to see our destruction.
Until next time…. Please feel free to comment and share
Miriam 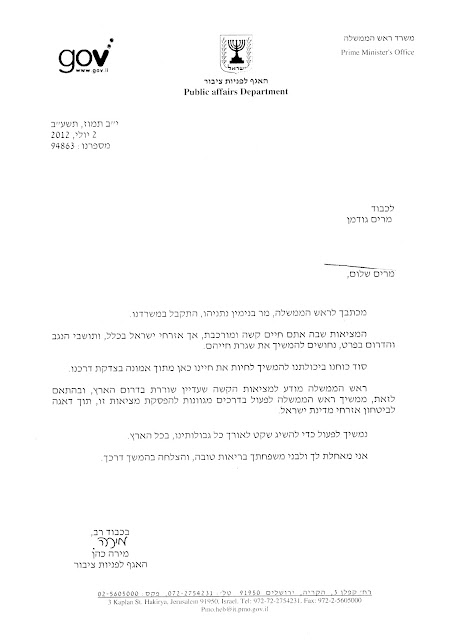 Posted by The Blogging Safta at 9:42 AM 5 comments: