Shalom and welcome back!

A loyal reader suggested that I write a blog about living in an area where kassams and grad missiles are landing. Since it has been very noisy for the past couple of days, I decided to write this blog.

My family & I live in Netivot, a city in the . We are located 10kms from . Our neighboring communities are located within the regional councils of Sedot Negev, Eshkol, and Shaar Ha Negev. The community of Sderot is about 10 minutes from us by car.

We have grandchildren that live in Ma’agalim and go to school in Kfar Maimon, part of the Sedot Negev communities.

Each of the children's classrooms is a fortified bomb proof room with a security door. Before they moved into these classrooms, they had an unprotected classroom.

Children in have fire drills, these children have kassam drills. Every child knows that when the alarm goes off, they have to quickly go under their desk and roll up like a ball. They know that they have to stay away from windows and follow the teacher’s instructions. They understand this is not child’s play. With these new classrooms the children have protection from kassams

The army comes to the school to visit, teach and reassure the children. In the playground there are bomb shelters in case the siren rings during recess. Unfortunately, Kfar Maimon is on the receiving end of many Kassams.

We, in Netivot, have had over the past couple of years several grad missiles fall. Kassams can’t reach us, as they can not be aimed and can only go a few kms. Grads on the other hand are directed and can go 20kms. They usually land in or near the cemetery of the Baba Sali which is on the perimeter of the city.

We have had grads land in the center of town, near a gas station, in the shuk [market] and two have landed not far from our apartment. One was in a farmer’s field. We could see the smoke rising from our balcony. The other was a little to close for comfort. It landed in a construction site in back of our apartment. Fortunately, there were no injuries or damage from these attacks.

Netivot, as with other communities, is hooked up to a warning air raid siren. When the siren rings, you have 40 seconds to go into your safe room or a public bomb shelter.

When the kassam or grad missile lands it makes a very loud boom and the windows and sometimes the floor vibrates. The hole in the ground is deep and black.

Life goes on. We are not afraid to leave our apartment. We take buses, go where we have to go and do whatever we need to get done.

Living in this area, you get used to the different sounds. We sometimes have helicopters hovering and circling over our neighborhood for hours, waiting for orders. You learn the sounds of booming in the distance, which are the terrorists and which is the army responding.

By far, Sderot and the moshavim and kibbutzim close by, have had the most attacks. Sderot can be targeted up to 30 to 40 times a day. It is only 2kms from . The property damage is extensive. Many residents have been seriously injured. One child lost his leg. Children and adults are suffering from mental anguish. There have been deaths to both children and adults. Parents are afraid to send their children to school as the schools are not fortified. Kassams have landed near kindergartens and day cares. One kassam landed in a shul, beside the Aron HaKodesh, five minutes after a dedication of a new Sefer Torah and everyone had left. Unemployment is very high and dispair is everywhere.

But with every tragedy there is sunshine. Mitzvot are happening all the time.Everyone cares.

In Beer Sheva there is a Challah project where you can order your Shabbos challahs from Sderot. This past Pesach, buses filled with women from and area came to Sderot to do their Pesach shopping. During the summer, a convoy of cars from the North came to visit the residents and shop.

The Sderot Online Mall [link on side of blog] is a private initiative of people from the center of the country, trying to give new business opportunities to the citizens of Sderot & all the other moshavim and kibbutzim that are close to and surrounds the strip. The residents of Sderot have to know that they are not alone.

As I sit at my computer typing this blog, I hear a very loud boom in the distance. When will it end.....nobody knows.

May the Hand of Hashem protect us all.

Here is picture of a kassam. 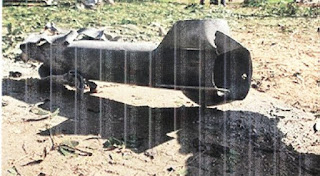 Several months ago I wrote a poem about Sderot.

The siren is blaring

Hold on to their precious children

run to the shelters

Saying Tehillim, that all will be well.

The children are screaming.

The noise is deafening.

Their parents want to know

When will this all stop.

Suddenly, there is aloud boom!

look for the injured and the damage.

B"H, this time there were no deaths.

Where is the government?

Why aren't they doing anything?

These are the questions on everyone's tongue.

Oh, why has our government abandoned us?

Hashem, Sderot is in Your Hands.

I pray the day will come

will be sent to do its job.

And Sderot will be once again QUIET!

I hope that you found this blog to be informative. Please feel free to pass it along.

It all started around 8:05 in the morning, the third day of Chanukah, Dec. 24th, when the first siren went off. We went to our safe room, my husband closed the metal window & then boom..... 10 minutes later we were in our safe room again.

This repeated 5 or 6 more times. In between, we could hear the siren from a distance goings off in other yishuvim.

My daughters live in Ma'agalim 5 minutes from me......She also had many trips to the basement of their house. Devorah spoke to the kids and told the 3 golder kids [11,7,6] that when they go downstairs they must bring one of the younger children with them. [2,3,4]

The 3 older kids are used to the siren going off because they go to school in Kfar Maimon, that borders Gaza and have sirens 3 /4 times a day. Even still Adi who is 7 was very upset. Home is supposed to be a safe place.

We are not leaving Netivot. The attacks are annoying, but I will never allow arabs to scare and make me run from our home. That's what they want. To rid Jews from the Negev.

I hope today will be quieter......but if we don't go and clean up Gaza this will be a rewinding story.