First a little background to explain this blog. Last November, I wrote a blog about an Israeli treat called Krembos. The other day, a friend and fellow blogger Batya Medad wrote a blog called Crembos or Krembos, The Taste of "Old Israel".
I sent Batya a blog comment saying that I wrote about krembos last year, and she suggested that I submit my blog to the The Krembo Challenge .
And so I did! This is the blog that I posted on November 11, 2010.
It’s That Time of Year Again…..
Traditions are wonderful and very important. We have personal and family traditions, religious traditions and country traditions.

Israel is no exception. Come late October, the chagim [Jewish holidays] are all over and life is getting back to a regular schedule with no more mid week days off of work or school.

At this time of the year in Israel, a tradition is happening on the grocery store shelves. Colored boxes of 10 or 12 Krembos are appearing. If you are not from Israel, I’m sure you are asking yourself, “What is a Krembo?”

Krembos are a very popular winter treat. They come wrapped in a colorful aluminum foil. Krembos have a round cookie base on the bottom and marshmallow cream on top, coated with a thin layer of chocolate. Krembos also come in vanilla and mocha flavour.

In Hebrew, the word krembo is the combination of krem (cream) and bo (in it). 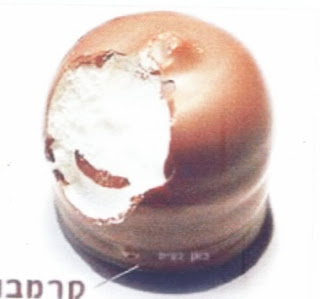 The "krembo season" is from October to February. More than fifty million krembos are sold each year. Krembos are a part of winter as ice-cream is a part of summer.

According to a study funded by Strauss, Israel's leading krembo producer, 69% of Israelis prefer to eat krembos from the top down (starting with the cream), and only 10% start with the biscuit at the bottom; the rest had no preference.

In the Hebrew version of Harry Potter and the Philosopher’s Stone, the character Dumbledore’s favorite sweet is a Krembo, rather than a lemon sherbet .

The Krembo has become a national icon. While considered a children's favorite, researchers have found that it is eaten and enjoyed as a comfort food of Israeli expatriates in the United States. Krembos are so popular that they have their own Facebook page. I Love Krembos.

During Chanukah, Jews around the world, observe the custom of eating foods fried in oil to commemorate the miracle of the Temple Oil lasting 8 days when there was only enough oil for 1 day.

In Israel, the tradition is to eat, sufganiyot [doughnuts.] Sufganiyot are sold from after Simchat Torah [October] up to and including the 8 days of Chanukah. The most popular doughnuts are the ones filled with strawberry jelly and have powder sugar on top.
Bakeries and grocery stores sell sufganiyot individually and by the box, and they have become a favorite for school, home and office parties.


One of the largest bakeries in Israel, fries up more than 250,000 sufganiyot every day during the 8 day holiday. Every batch uses 100 kilograms of dough and makes 1,600 sufganiyot.  That's a lot of doughnuts!
There are many homemade doughnut recipes. If you want to try your hand at making sufganiyot at home, here are several different doughnut recipes.

So whether you fancy krembos or sufganiyot, or both, relax and enjoy the sweet taste.

Until next time......enjoy and pass around.
Miriam
Posted by The Blogging Safta at 10:38 AM 3 comments: